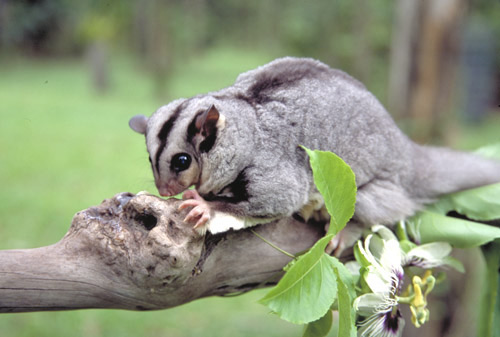 The Mahogany Glider is a small gliding possum occurring in North Queensland. It is nocturnal, elusive and silent for much of the time. It receives it’s name from its buff-coloured belly. The top of the head is pale and bears a dark stripe. Fully grown, They are around 600 mm long from head to tail-tip and weigh 300-450 g.

Mahogany Gliders are restricted to the coastal southern Wet Tropics region of northern Queensland. They live in a narrow and highly fragmented band of lowland sclerophyll forest extending around 140 km from Toomulla, north of Townsville, to Tully and up to 40 km inland. Most recorded sightings have been at altitudes below 120 m. The main canopy and sub-canopy trees are eucalypts, bloodwoods and paperbarks and less commonly swamp mahogany and turpentine with an open mid-stratum of smaller trees and shrubs (e.g. wattles, forest siris, golden parrot tree, black she-oak, pandanus) and a grassy ground stratum in which grass trees may be present. The Mahogany Glider requires a relatively open forest structure for efficient gliding and tends to avoid dense vegetation such as rainforest.

The Mahogany Glider forages alone at night feeding on nectar, pollen and sap from over twenty different species of trees and shrubs. It also eats honeydew (a sweet sticky substance excreted by insects such as aphids), insects such as lerps and the arils of wattles (an aril is a protein-rich stringy structure which connect seeds to the pod). Nectar and pollen feeding gliders are known to provide an important ecosystem function as pollinators of tree species such as some eucalyptus and banksia.

Mahogany Gliders use hollows in large eucalypts and bloodwoods as dens for sleeping and rearing their young. They den either alone or in pairs and can use up to 10 dens in a single season. Dens are lined with a thick mat of leaves. They appear to be socially monogamous and may den with their mate. They actively mark and defend their home ranges by chasing out other individuals. Territories are around 20 ha in size.

Mahogany Gliders first breed at around 12–18 months and wean their young after four–five months. They generally raise only one litter per breeding season. A litter usually consists of one or two young, usually born between April and October. After weaning, juveniles of both sexes appear to disperse from the parental home range.

Threats to their Survival

– Isolation of populations and decline in habitat quality are major ongoing threats to the Mahogany Glider. Past clearing for agriculture, grazing, forestry and human settlement has reduced their total area.  The present population has being estimated to comprise of about 1,500 individuals.

– Road kill. The Mahogany Glider, being highly mobile, requires more or less continuous vegetation cover to range freely. Infrastructure corridors such as major roads, railway lines and powerlines present barriers to movement as do clearing and settlement patterns in the landscape

YOU CAN MAKE A DIFFERENCE

Mahogany Gliders need large areas of habitat in order to survive. We must protect existing habitat and continue to replant. As well as establishing new corridors for this amazing animal.

Become a a forest Friend today and help us help the Mahogany Glider.